Sleep research is one of Prof. Claudio Bassetti’s great passions. He is Head of Department and Senior Consultant at the Department of Neurology, University Hospital of Bern, Switzerland. His research includes examining animal sleep patterns, which gives him a better understanding of human sleep behaviour. In this interview, he explains why he never became a psychiatrist or a professional basketball player, and the important role a broken leg played in his life.

Prof. Bassetti’s consulting room is light, tidy and for an office, really cosy. This is mostly due to the pictures and objects the Consultant Neurologist at the University Hospital of Bern used to decorate an otherwise plain room. They include things like photos of family and friends, books on art, keepsakes from patients – objects that reflect his many interests. Among these keepsakes are two of his sister Fiorenza’s works and an icon hanging on the wall.

Prof. Bassetti, please explain what this icon means.
I have always been interested in Russian culture. I did my first school project on the topic of Russia at the age of 11 and always wanted to learn Russian. Now, I am married to a Ukrainian, have three sons with Italian and Russian names, and speak Russian and Italian at home with my family.

You speak Russian?
Yes, fluently. I had mastered it before I met my wife Tatiana. I always dreamt that my children would one day speak Russian.

Where did this interest start? Did you advocate communist ideas in your youth or were you attracted by the culture?
My fascination started in childhood, when I was still unfamiliar with Russian literature. I found Russia a puzzling country, a mystery which appealed to me. Its landscape, its immensity and its vastness all interested me. I was fascinated by the serious behaviour of the Russian athletes during the Olympic Games, although I knew from their music how very emotional the Russians are. Famous chess players from Russia also contributed to my fascination with the country. And then there was also the Iron Curtain. For me, learning Russian meant understanding something that not everybody else was able to. My eldest son, he is 15 now, has developed a similar passion for Japan. Mangas, cartoons and the food were certainly all influencing factors.

Does he want to learn Japanese?
Yes, but he has to concentrate on school exams at the moment. He already speaks five languages: Russian, Italian, German, French and English, and understands Ukrainian. I myself speak six languages. Travel and openness towards other cultures are important to me. I appreciate the great diversity we have here. I would like to see the medical scene in Bern become even more international.

Did you grow up speaking several languages, like your children do?
No, I grew up in Bellinzona speaking Italian. I studied German, French and English at school, and the other two languages on the side.

What brought you to study medicine?
When I was 14, I broke my leg skiing and spent a long time in hospital. Today, this hospitalisation would take a few days. For me, it took three and a half months, as I experienced one complication after another. This time left its mark on me. Despite having been treated by a very good doctor, whose bedside manner I greatly appreciated, I was a child lying in an adult ward. That was not easy for me. I learnt to make the most of my time in hospital. My classmates brought me my schoolwork and I studied on my own, which enabled me to keep up with my class. I also lost my fear of hospitals. With time, I grew to like the day-to-day events: the nurses’ work, the doctor’s visits and so on.

Medicine, the profession I chose, represented a combination of my two great passions: biology and history, science and the arts. At the beginning of medical school, I still doubted whether medicine was the right decision. But later I realised what it means to practise medicine: people, disease, tending to patients and being responsible for them.

Were your parents proud of your career choice?
My father was an engineer and wanted me to follow in his footsteps. Initially he was slightly disappointed when I decided to study medicine. He eventually came to terms with it however, and our relationship remained good despite my choice.  Due to my nature, my character and my communication skills, my mother saw me as a future diplomat. She was not too far off, as I seem to have a knack for politics. My mother had been keen on studying medicine herself, but was unable to achieve her dream due to financial reasons.

Why did you specialise in neurology?
To begin with, I was fascinated by psychiatry, as I saw in it everything that medicine incorporates: the biological and human aspects. However, I never met a psychiatrist who really inspired me. In addition, I had great respect for the psychiatrist’s task of having to work with high focus not only in the field of neurobiology but also on a psychosocial level. That seemed too difficult a task when I was a young doctor. I therefore opted for a ‘simpler’ specialty: neurology. I am very content today and feel that this was the right decision. I started my professional career in Basel, then moved to Ticino and worked simultaneously in both Bern and Lausanne’s departments of neurology, then worked in the US and Zurich until I finally took a detour via Ticino through which I happily returned to Bern, a city I am very fond of.

About
The new journal BrainMag, by the Swiss publisher medEdition, combines the subject areas of neurology, psychiatry and geriatrics. In addition to covering purely professional aspects such as original publications, trial abstracts and conference reports, BrainMag covers personal, emotional and entertaining topics from the world of medicine. We focus on large-scale personal interviews with your colleagues. The journal will be published in German four times a year and will cost CHF 40 annually. Brainwork subscribers are entitled to a 50% discount. Simply send an email with «BrainMag/Brainwork» in the subject line to info@mededition.ch and include your delivery address. 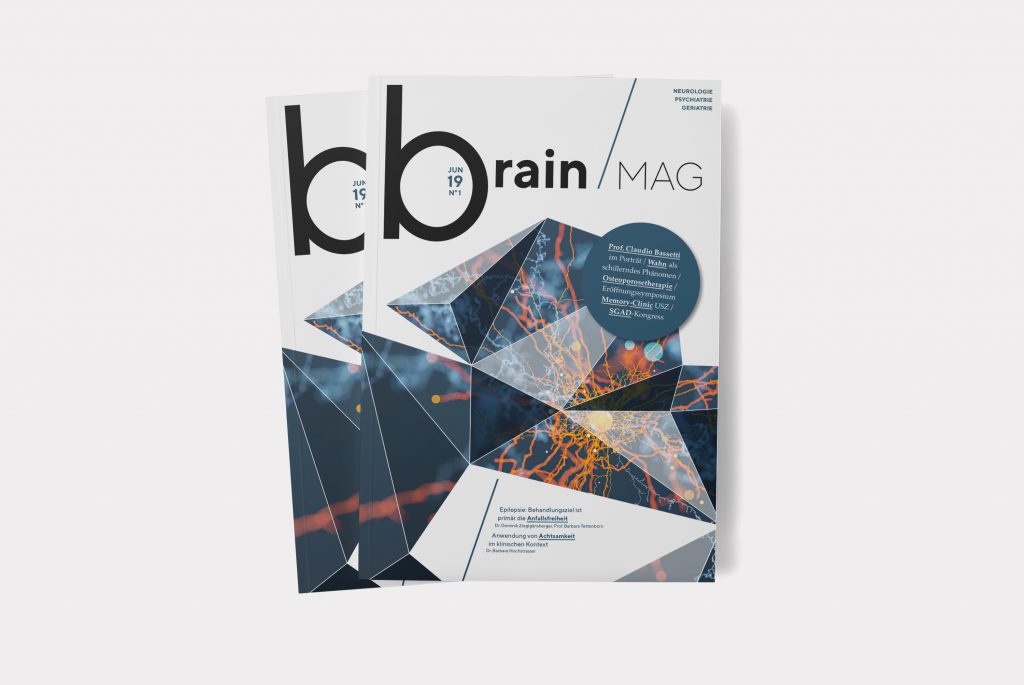 Previous
Smartphone-controlled device could revolutionise drug delivery in the brain
Next
Enough evidence for vitamin D in MS?

Rachel Park, MA
20th September 2019
Previous
Smartphone-controlled device could revolutionise drug delivery in the brain
Next
Enough evidence for vitamin D in MS?
You might also like

All stories by:Rachel Park, MA
Brainwork is supported by unrestricted grants from: