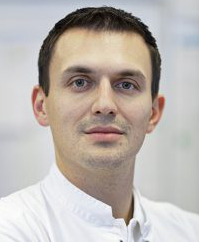 Dr Michel Röthlisberger is a neurosurgical consultant in the department for neurosurgery at the University Hospital in Basel, Switzerland. He specialises in endonasal endoscopic and lateral skull base surgery and is actively involved in several clinical research projects. In 2018, he spent a year in Malaysia where he gained important clinical as well as research experience as a neurosurgeon. At the end of this year, about 10 years after starting his career, Dr Röthlisberger is about to file his application for “venia docendi” at the University of Basel. In our interview, he tells us about his research interests, what motivates him and his experience abroad.

During his time in high school, Dr Röthlisberger started developing a particular interest in neuroscience. For his A-level exam, he conducted a research project at Novartis, where he examined the effect of caffeine on hippocampal neurons in mice.“ My interest in neuroscience started there,” he remarks. The head of the research group back then was a medical doctor, who was also involved in clinical studies in humans. “I kind of realised that the clinical aspects are as fascinating as the basic science.” In the summer of 2003, he applied to study both biology and medicine. After he passed the admission exam for medicine, he made the final decision to follow this path. “Already after 2–3 weeks into the studies I realised that medicine is my passion,” he says. From the start, he was intrigued by the brain and its connections. “Then, rather at the end of my studies, I realised that neurosurgery is quite different from neurology in general, and my fascination was strong for the surgical part of neurology,” he mentions.

“When I finished my studies and I applied for neurosurgery, I had a gap of one year where I decided to do my doctoral thesis.” During that year, Dr Röthlisberger performed research in the field of psychiatric disorders and neuroanatomical analysis. “I found it very fascinating to do regression and risk factor analyses. I later on projected this fascination into my clinical research activities,“ he states. His current research focus lies on clinical outcomes in vascular and skull-base neurosurgery. One project he is involved in is investigating risk factors for subarachnoid haemorrhage. For this, he uses data collected for the Swiss Study on Subarachnoid haemorrhage (SOS) project. “This project is a collaboration of all tertiary neurovascular referral facilities in Switzerland that treat patients with ruptured intracranial aneurysms.” He studies how particular anatomical factors influence the clinical presentation, the course and the outcome of patients with ruptured aneurysms. “I find that very fascinating, because within this nation-wide database you can find a lot of detailed outcome information from approximately two-thousand patients covering the entire healthcare system of Switzerland.”

Another one of his research interests is nosocomial meningitis caused by external ventricular drains (EVDs). In 2018, he was able to show in a prospective randomised clinical trial that a chlorhexidine dressing placed at the exit of the EVDs reduces colonisation of the catheter and indirectly reduces infections. “One of my fellow colleagues was working in Paris, and the local doctors there used the results of my study in their clinical practice. This shows that this was a very important study directly influencing patient outcome,” he explains happily. “I learned a lot by planning and executing a prospective randomised trial in an interdisciplinary setting, and it was fascinating,” he adds. For the future, he has big plans when it comes to clinical research. “There are many projects in the line right now,” he states, particularly in the field of EVD infections in which he has several ongoing studies, one that includes new nation-wide data analyses from cohorts of the Swiss SOS project.

“My time in Malaysia was an incredibly unique and important experience”

“My clinical activities involve endoscopic and transcranial skull base surgery, and neurovascular consultations. In neurosurgery, we have this culture of going abroad and learning at other institutions,” he mentions. One of his mentors had previously spent some time in Malaysia. “When he came back, he was extremely experienced hands-on with endonasal endoscopic surgical skull base techniques as an oto-rhino-laryngologist.” Dr Röthlisberger followed his path from the neurosurgical perspective and went to work at the University Hospital in Kuala Lumpur, Malaysia from 2018 to 2019. There, he focused on endoscopic skull base surgeries, mainly for pituitary adenomas and larger lesions of the sellar and parasellar regions. The training also included transcranial microsurgical approaches for cerebello-pontine angle lesions and meningioma along the entire base of the skull. “This was an incredible experience,” he mentions. He appreciated the contrast between the high-end operational equipment of a referral centre in the modern city of Kuala Lumpur and multicultural, rural Malaysia. “This was an incredible mix of things I like the most: neurosurgery, travelling, diving, sports and food!” He mentions that his time at the hospital in Malaysia brought his career to where it is now. “I am now really specialised in this field of endoscopic skull-base surgeries. In addition, I was able to establish important collaborations including prospective patient safety studies and international text book chapters.”

“In neurosurgery, interdisciplinarity is extremely important”

Dr Röthlisberger believes that even though endoscopic surgery is a very important neurosurgical technique, it may not always be the best way to go. “At the end of the day, for example, the microsurgical trans-sphenoidal technique is equal when removing a standard pituitary adenoma, in terms of extent-of-resection”. His neurosurgical mentor in Kuala Lumpur made a clear point: “Most of the larger lesions we are able to resect through the nose, we are used to resecting through the head as well”. This message is very important. And sometimes “endoscopy is actually not minimally invasive compared to going directly through the head.” Nevertheless, Dr Röthlisberger thinks that it is very valuable to have endoscopy as a tool for particular pathologies. “Indications for extended endoscopic approaches are broad, when neurosurgeons and oto‑rhino-laryngologists work together as a team,” he summarises. He particularly stresses the importance of interdisciplinarity in neurosurgery for the optimal treatment of patients, noting that “the interaction between specialised teams is mandatory, and so are combined treatment approaches.” He believes that the future should move towards combining all specialties together in one tumour centre. “Whenever there is a complicated case, we are happy to discuss the optimal strategy with other teams, and I believe this is crucial for the best outcome,” he concludes. By promoting interdisciplinarity and aspiring to answer important research questions, Dr Röthlisberger will continue to strive for the best patient care in the future.

Anna Stelling, PhD
7th December 2020
Previous
The risk of a clinical event in radiologically isolated syndrome
Next
Amyotrophic Lateral Sclerosis – New Clinical and Research Developments by Dr Martina Wiedau
You might also like

Speaking to Prof. Andrea Rossetti – “Often in life, things happen by chance, but then you have to seize the chance“

Speaking to Prof. Günther Deuschl – “The world is not a world of competitors, it is a world of collaborators.“