Journal watch: Who is at risk for recurrent transient global amnesia?

Journal watch: Who is at risk for recurrent transient global amnesia?

Transient global amnesia (TGA) is a clinical syndrome characterised by sudden-onset amnesia usually lasting for 4 to 6 hours. It often has an identifiable trigger, such as sexual intercourse, strong emotions or exercise and has also been strongly associated with migraine. Usually, TGA is an isolated event with recurrence rates ranging from 3 to 24%.  This notably large range of recurrence rates that was found in various studies reflects the variability in TGA definitions, as well as the relatively low number of patients with recurrent TGA. It was therefore important to determine who is at risk for TGA recurrence, especially because TGA can mimic neurologic emergencies such as seizures or stroke and can be perceived as emotionally distressing for affected patients.

e aim of the described study was to examine potential risk factors for the recurrence of TGA, thereby possibly providing mechanistic insights into the pathophysiology of TGA. The authors hypothesised that specific environmental, physiological or genetic factors may increase the risk for TGA recurrence. 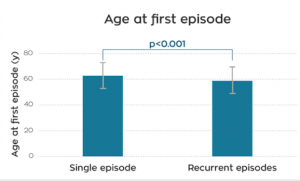 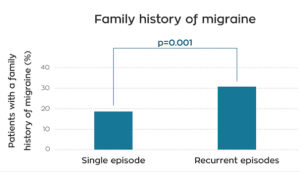 Figure 1. Patient age and history of migraine in patients with recurrent versus single TGA.

This study including a large cohort of TGA patients showed that recurrent TGA was associated with earlier onset age and a higher prevalence of personal and familial migraine history when compared with patients who experienced only one TGA. In the future, these results could be utilised to inform patients about potential recurrence risks based on their medical history.

The results of this investigation show that TGA recurrence is not rare. Furthermore, the risk of a recurrence is higher in patients with a history of migraine and in patients who are below 60 years of age during the first TGA episode.